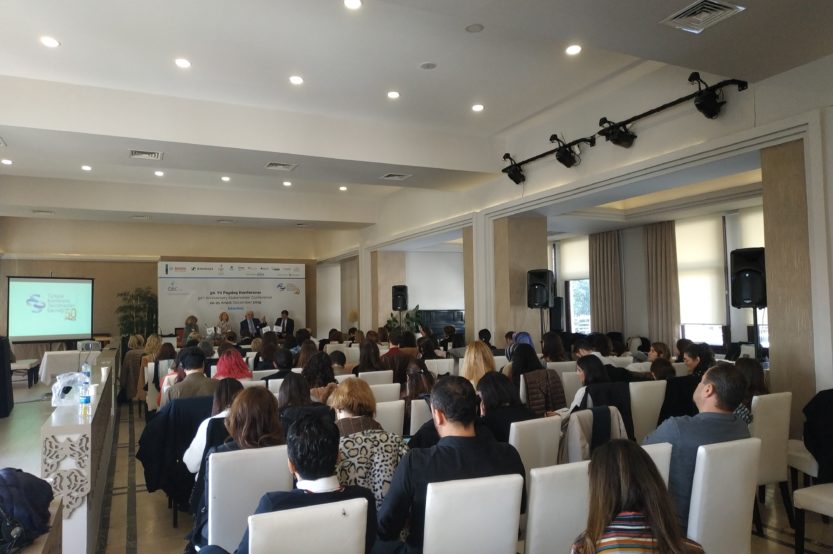 The seats were no less than packed with intellectual minds. The two-day conference allowed many stakeholders to voice their side of the story –  from interpreting trainers to Artifical Intelligence (A.I.) developers, national & international association members to students, academics from Translation Studies and Translation & Interpreting departments to representatives from technical equipment companies, and well: our beloved conference interpreters.

“The Most Important Skill of Tomorrow Will Be Creativity”

After the opening notes by the TKTD President Bahar Çotur, AIIC Turkey Regional Secretary Verda Kıvrak  and the ICVB / TUGEV General Manager Dr. Cemil Hakan Kılıç, day 1 set off with an inspirational speech by programmer Zafer Demirkol on A.I. and its use in conference interpreting (CI).

Demirkol referred to a paradigm shift from data-based programming towards a rule-based machine learning approach (RBML) that would speed up the rate at which A.I. can be taught to perform simultaneous interpreting. Though Demirkol declared A.I. would not replace humans for another thirty years ,as even with RBML more data and more processing power were needed; later on he shared with the attendees a breakthrough by China’s Baidu performing STACL (Simultaneous Translation with Anticipation and Controllable Latency) with remarkable success – which we leave to your judgment.

Next up the floor was yielded to Ildiko Horvath, President of the European Masters in Conference Interpreting. Horvath touched upon the standards and principles of CI training in Europe.

“The first undergraduate program of Turkey was launched in Hacettepe University in 1982, followed by Boğaziçi University in 1983.” Diriker informed: “There are 67 undergrad programs in Turkey today; 33 English-Turkish, 9 Turkish-German, 8 Arabic-Turkish, 4 Russian-Turkish, and 3 programs with more than 2 languages.”

Continuing on with the academic side of the environment surrounding CIs, it is fair to say she left the students, academics and all the others involved in the Academy in one way or another more than pleased.

Day 1 was finalised with a delivery by AIIC’s VEGA Network Coordinator Claudia Cereghino (you can read here about her work) about “initiation to the profession” and a Q&A session.

“The Better the Conditions of a Profession, The Less Need For An Association”

The second day launched off with a notable speech from the President of AIIC Uroš Peterc on the significance of professional organisations and cooperation between national and international associations. What associations you say?

“As a member of the association (AIIC), the first thing you get is recognition as a professional” he propounded. Sharing an anecdote about the attempted confiscation of a consecutive interpreter’s notes in Helsinki, he added: “The better the conditions of a profession, the less need for an association.”

Peterc gave up the mike with a fair message:

“Interpretation has to be excellent. Mediocrity in interpreting is useless.”

All in all, it was a marvellous experience to listen to the many stakeholders of the Conference Interpreting world. On that note, the smashing of buttons shall cease after a list of notable mentions:

Highlights & Quotes from the Rest of the Day

About the cooperation between national and international organisations: “AIIC & TKTD follow the same ideals: excellence in conference interpreting.”

Regarding the importance of solidarity and professional associations:

To students & the newcomers to the profession: “The path you will be setting on in this era will be much different from the path we followed in the last century.”

On the status of Greek CI circles: “Greece has no professional association so far as interpreting is concerned. We are working on it. Turkey and Italy are the two giants and role models for us.”

On solidarity: “Stakeholders must work hand in hand to ensure an elevation in mutual understanding as well as the quality of work.”

About the matter of ‘man versus machine’: “Even the developers of AI solutions say that they are quite far away from being near human interpreting.”

– Zeynep Yanat Kırçal, Conference Interpreter
Regarding the demand for RSI: “The clients prefer Remote Simultaneous Interpreting as it is more affordable.”

The downsides of RSI: “What common grounds can we meet on when everyone else is a world apart?”

Problems in RSI: “We are expected to deliver excellently even in the cases of syllables, words or whole sentences being lost because of weak internet connection.”

On RSI companies: “Remote Simultaneous Interpreting companies are aware that they should also be pleasing the interpreters.”

Problems in RSI: “The prominent problem in RSI is internet connection; as the person responsible for providing infrastructure you cannot blame any other stakeholders.”

On RSI connection problems: “As quick response time in interpreting is quite significant, perhaps ISPs could be granted a seat in the upcoming TKTD conferences.”

Event calendar for the january is on!

It’s January already! For the first month of 2020, our detailed calendar with international webinars, seminars, conferences and events is on air! 👉👉 translation-1.com/events Post Views: 1,389

On the 19th, T-1 attended a conference organised by the AIIC VEGA Network in close collaboration with The Conference Interpreters Association of Turkey (TKTD). It was one conference with two different audiences: a session for students and newcomers to the profession in the morning and another session for the professionals and seasoned interpreting booth veterans later in the day.